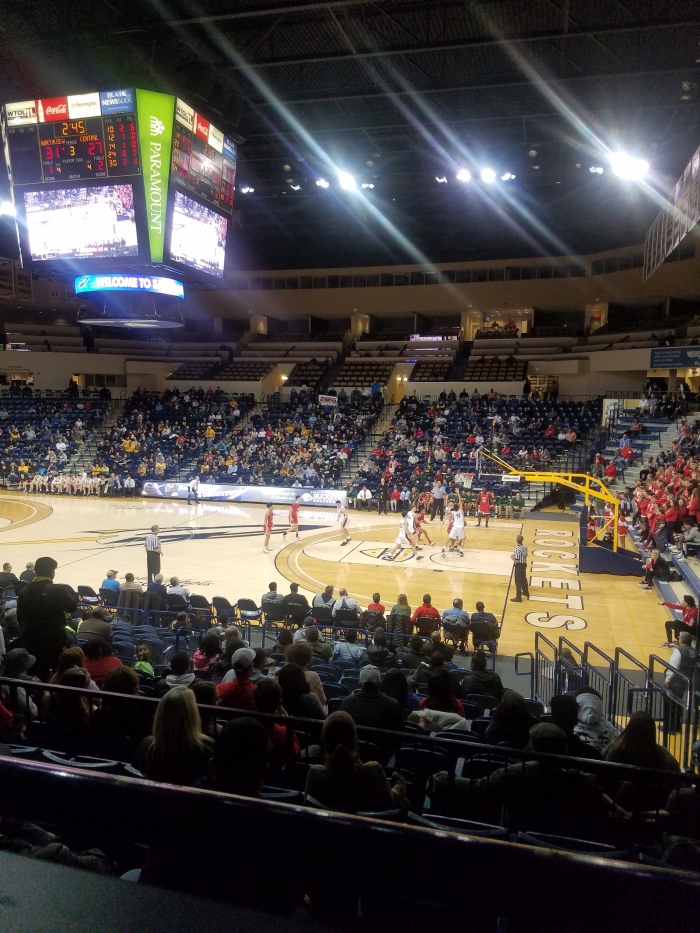 On Tuesday night, Savage Arena on the campus of the University of Toledo played host to a pair of Division I District Semifinals. In the first game of the night Start defeated Findlay 53-36 to advance to the District Final on Saturday night. Here is who stood:

2020 G Tavaz ‘TJ’ Showers (Start) – The most impressive performance of the night came from Showers, who can create offense and put up points in a hurry, and did so here. He was so impressive knocking down shots from the perimeter, off the catch and off the bounce, on his way to a 28 point effort including 8 three-pointers. Reads screens well, can attack the basket and finish, and has a consistent and reliable release from the outside. Really plays hard and competes, has fun, and leads his team. Locks in defensively and buys into the gameplan on that end of the floor.

2021 G/F AJ Adams (Findlay) – One of the most promising prospects in Northwest Ohio, and showed why that is the case, even in the losing effort. Adams was very active in the paint and in the mid-range, scoring in a plethora of ways and through numerous defenders. Becoming more and more polished as a scorer, and that was evident on Tuesday. Rebounded the basketball on both ends of the floor utilizing his strength and length. Has the ability to guard multiple positions on defense, on the block and out on the perimeter as well. Adams finished with 15 points in the loss, and has a promising AAU season ahead.

2022 PG Max Roth (Findlay) – His game continues to grow with each viewing of him. Is a true extension of the head coach, even at his young age. Able to score in a variety of ways. Can trust him with the ball in his hands, shares it well, and plays with an edge from the lead guard position. Likes to get out and run, makes good decisions with the basketball.

2020 G Adrian Michael (Start) – Looked the part of what makes him special as an unsigned senior prospect with his ability to defend, knock down shots from the outside, and run in transition. Saw his confidence grow throughout as he knocked down open looks from the outside. Makes hustle plays, creates turnovers, and starts the break leading to easy scores. Defensively is so quick, smart, can put pressure on the ball, and speed up the offense. Was a key piece in his team moving on.

In the second game of the night on Tuesday, Sylvania Northview used a complete effort to knock off Toledo Central Catholic and advance, by a final score of 58-52. Here is who stood out:

2020 PG Cameron Awls (Toledo Central Catholic) – The senior has no reason to hang his head, even in the loss in this one, as he showed resiliency and toughness throughout this contest. It wasn’t perfect play on his or his team’s part, and it wasn’t always pretty, but the grit, and ability to keep pushing until the final buzzer was evident. Awls did a nice job of attacking the rim on offense throughout the night, creating opportunities for himself and others. Defensively he did his part to slow down a talented opposing backcourt. Headed to play for Defiance College next season.

2022 F Sean Craig (Sylvania Northview) – Craig was nothing short of phenomenal on this night. He seemed to be everywhere, on both ends of the floor, and seemingly made his presence felt on every trip down the floor. Scored it with high-efficiency around the rim, around the mid-range, and nearly out to the perimeter. Played with strength and confidence, finishing through contact and refusing to be denied on offense. Used his length to anchor their defense, altering shots, cleaning the glass, and communicating on that end of the floor. Delivered a performance that truly looked the part of a DI prospect in the future, finishing with 22 points and 11 rebounds in the win.

2020 F Dominique Cole (Toledo Central Catholic) – In what ended up being his final high school game, Cole left it all out there, delivering solid play for his team on the block all night long. Can score over either shoulder, comfortable on either block, has some finesse to his low post game. Capable shooting the basketball from the outside and displayed that on multiple trips. Didn’t force things if it wasn’t there. Ran the floor and rebounded well. Sees the floor, provided strong help defense, good athlete at his size.