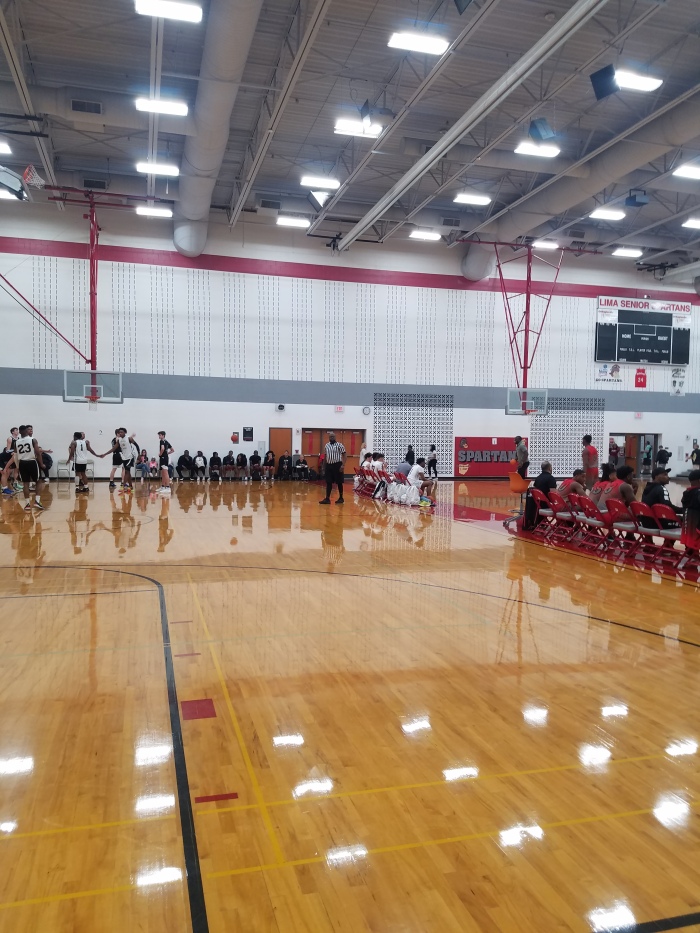 On Saturday and Sunday the 2nd annual C2K Classic took place in Lima, as numerous teams primarily from NW Ohio as well as Michigan competed for a tournament championship. I was there on Saturday morning for pool play to take a look at numerous talents from Northwest Ohio. Here is who stood out:

2020 C/F Dominique Cole (Toledo Central Catholic/All-Ohio Gold) – He followed up on a very good showing the prior weekend in Fort Wayne with arguably an even better showing this weekend in Lima. Cole continues to develop with a noticeably improved feel in the post out onto the perimeter. He is scoring at a highly efficient level, from the low block to the elbow, and out to three point range where he has proven he must be accounted for. Fundamentally sound on the defensive end, he’s rebounding well as he always has, and runs the floor with an improved pace. Has had a tremendous Spring thus far.

2022 PG Nereon Grier (Start/Hopson Elite) – On a morning where the majority of his team looked pretty sluggish, Grier proved ready to go from the jump. Did a really nice job of orchestrating things on the offensive end as he found teammates, found his way into the paint, and competed at a high level. While a bit undersized, he uses his quickness and instincts to make plays on the defensive end of the floor. Sees the floor well and his decision making continues to improve and develop.

2020 G Adrian Michael (Start/All-Ohio Gold) – While he won’t ‘wow’ with his brand of basketball, Michael is rock solid in the backcourt. He consistently makes winning plays. Doesn’t turn the ball over, shoots it at a high clip from the perimeter, is hard to find in transition, and is an elite defender from his guard position. His effort and intensity make him a tremendous asset to any squad. Has put together back to back good weekends of basketball.

2020 G Javante Hayward (Rogers/Hopson Elite) – If he played for any other team in Toledo’s City League, more people would without a doubt know more about this scrappy, hard-nosed guard. His Rogers team is filled with talent, and therefore attention paid to him probably isn’t what it should be. This weekend with his Hopson Elite team Hayward’s aggressiveness was easy to see. He came out instantly looking to push the pace offensively and got downhill looking to score it or create for others. Made things happen and plays with a grit and swagger that you like to see from someone at his position.

2020 G David Walker (Maumee/Hopson Elite) – Has garnered some attention for his play throughout the high school season, but he clearly thrives in the AAU environment, playing freely and with a sense of urgency. Walker can score it and do so quickly when he gets rolling and on Saturday morning he showed just that. Crafty around the rim, and has a nice mid-range game. Led his team in scoring during their morning session.

2021 PG Cam’ron Gaston (Rossford/All-Ohio Respect) – Played above his age at the 17U level, and proved as he does time and again he’s a heart over height guard, who regardless of stature has a big game. Doesn’t shy from contact, tight handle, pushes the pace, gets to the rim, and can score it in bunches. Really competes and plays with an edge to his game.

2020 PG Jonzell Norrils (Toledo Central Catholic/All-Ohio Gold) – Norrils is one of the best two sport athletes in Northwest Ohio as he excels on the football field as well, where he has garnered the most attention from college coaches. With that said he is clearly a scholarship worthy talent on the basketball court too. Has a tremendous burst and build, Norrils is a true point guard that you love to watch lead a team. He communicates, has a high basketball IQ, and plays with a refreshing joy when he’s on the floor. Capable scorer from all three levels, gets to the rim and finishes well, efficient in the mid-range, and a consistent scorer from the perimeter. High level defender, using his strength and lateral quickness. Sets up teammates and understands where they are most comfortable. Can create off the dribble where he really has a good handle.