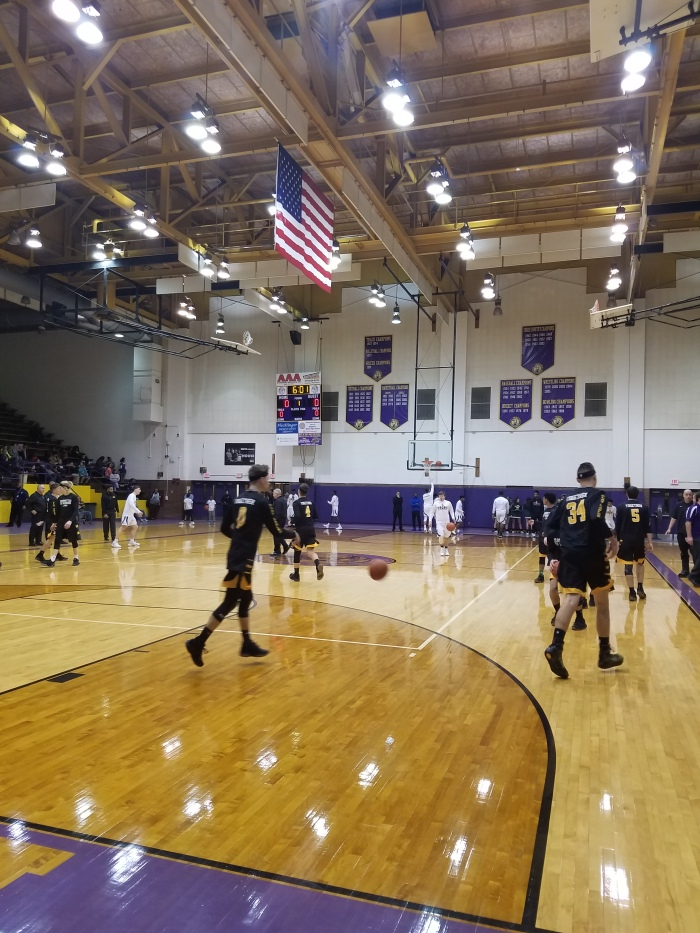 In a battle of teams from the eastern part of the Toledo area, Oregon Clay traveled to Waite for an out of conference game that would prove to be well worth the price of admission to all who came to see it.

Waite would be without their talented big man Keyshawn Leach for this one because of an altercation in a prior game, however they looked unfazed and unaffected coming out of the gates. Carl Banks, Mark Randall, and Dewayne Wells would all chip in for Waite in what was a fast-paced back and forth affair in the opening quarter. Talented junior guard Reese Wamer would get Clay on the board, however they would trail 9-15 after the 1st quarter.

The second period as was the case throughout this matchup would feature runs from both teams, none big enough to put the opponent away as runs would be countered by a run from the other, and the score would be all tied up at 29-29 at the half. Wamer would lead all scoring with 11 points at halftime for Clay.

To open the second half the backcourt of Carl Banks and Dominique Booth would really crank up the defensive efforts for Waite, as they would make a run and capture a considerable lead. Dewayne Wells would pick up the slack in the paint with the aforementioned Keyshawn Leach out, and the trio of Wells, Banks, and Booth would help Waite to a 54-39 lead over Clay after the 3rd quarter.

Clay would work their way back into the ballgame in the final period, led once again by Reese Wamer who was superb for most of this game, scoring the ball and getting teammates involved. Missed free throws and some careless turnovers would help the Clay cause and the score after regulation would be tied 69-69.

In the first overtime period Clay would win the tip, and resort to milking much of the clock, playing for an easy layup. They would get what they were looking for but Carl Banks would quickly answer for Waite. Back to back successful possessions would be followed by a Clay bucket to put them ahead. But in Waite’s final opportunity to tie it back up, Dominique Booth put-back a missed jumper to send this to 2 OT’s tied 74-74.

The second overtime would be a better version of basketball, with both teams competing, scrapping, and getting some big plays along the way. However, it would be a Dustin Aiton triple with seconds remaining that would put Clay up by one. Waite would not be able to convert on their end and would be forced to foul. A split pair of free throws put Clay up by two, and Waite could not get one to go at the buzzer. Clay would come from way behind to defeat Waite in 2 OT’s by a final score of 83-81.

Carl Banks would lead Waite with 32 points in the loss. The leading scorer in the City League would live up to the billing on this night.