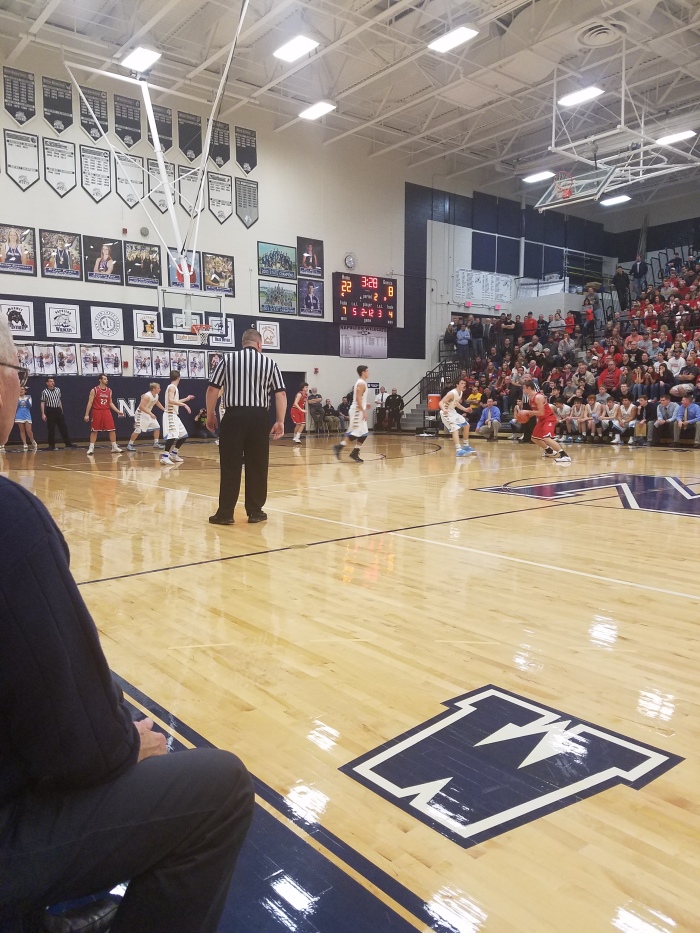 On Tuesday night the ‘Grand Canyon’ as it’s known, otherwise the gymnasium at Napoleon High School played host to the DIV District Semifinals. This District in particular being one of the most impressive around, as three of the four teams participating on this night were ranked in the state or receiving votes in the polls.

In the first of two games in front of a sold out crowd, Toledo Christian and Holgate squared off in an exciting but slow paced small school contest. As both teams were clearly working out some kinks and nerves early, Holgate would get out to a slight 9-7 advantage after the 1st quarter. Toledo Christian has had success offensively in transition throughout the season, that is no secret, as that has opened things up for their lethal three point shooting, and Holgate made it a point to slow the pace of this one down to their liking. After more somewhat sloppy, half-court basketball, Holgate would lead Toledo Christian 20-17 at the halftime break.

Toledo Christian would come  out of the half looking to hurry the flow of the game and did so effectively, with Delano Christian and Landon McGill knocking down some big shots along the way. However, Holgate would once again slow things down and cause some erratic play from the Eagles as they struggled to get anything easy on the offensive end; the score would be tied 29-29 after the 3rd. In the 4th quarter Holgate took control of the game thanks to the contributions from Bailey Hohenberger and Jake Grim, both would get tough, timely buckets, and knock down the free ones at the free throw line down the stretch. Toledo Christian would continue to struggle offensively, and Holgate would hold on to win by a final score of 48-39. Both Grim and Hohenberger would lead Holgate and all scorers with 15 points apiece. Junior guard Delano Smith would finish with 13 points to lead Toledo Christian.

In the second game of the night, Ayersville and Hilltop went at one another in front of a standing room only crowd in a highly anticipated matchup of state ranked programs. Ayersville was ready to play right from the tip and would get an early 8-0 advantage and Hilltop would never quite recover. Ayersville’s talented senior guard Dauson Dales would lead the way throughout the first period and the game with his hustle and court vision, and they would lead 13-4 after the 1st. It would continue to be all Ayersville as junior big man Ethan Schlachter helped widen the margin, cleaning the glass on both ends and getting easy ones around the basket. He would finish the half with 12 points, Ayersville leading Hilltop 30-14 at the break.

The second half would begin with Ayersville picking up where they left off, as senior guard Jacob Miller stole the show. Using his athletic ability on both ends of the floor, Miller was able to get multiple steals and utilize their possessions with crafty finishes and a strong mid-range game. Hilltop would make their best run of the game late in the quarter, cutting the deficit to 30-42 by the end of the 3rd quarter. Schlachter, Dales, and Miller would continue to make plays for Ayersville in the final period, with contributions from numerous others, as they would coast to a 58-44 win to advance. Ethan Schlachter would finish with 22 points for Ayersville in the win to lead all scorers.